Having attended the Irish Horizons Unlimited event the previous year, Graham Cotter decided to head back to the Emerald Isle in order to ride the world renowned Wild Atlantic Way; a coastal road of almost 1200 miles. Here are a few pointers for anyone planning their own trip… 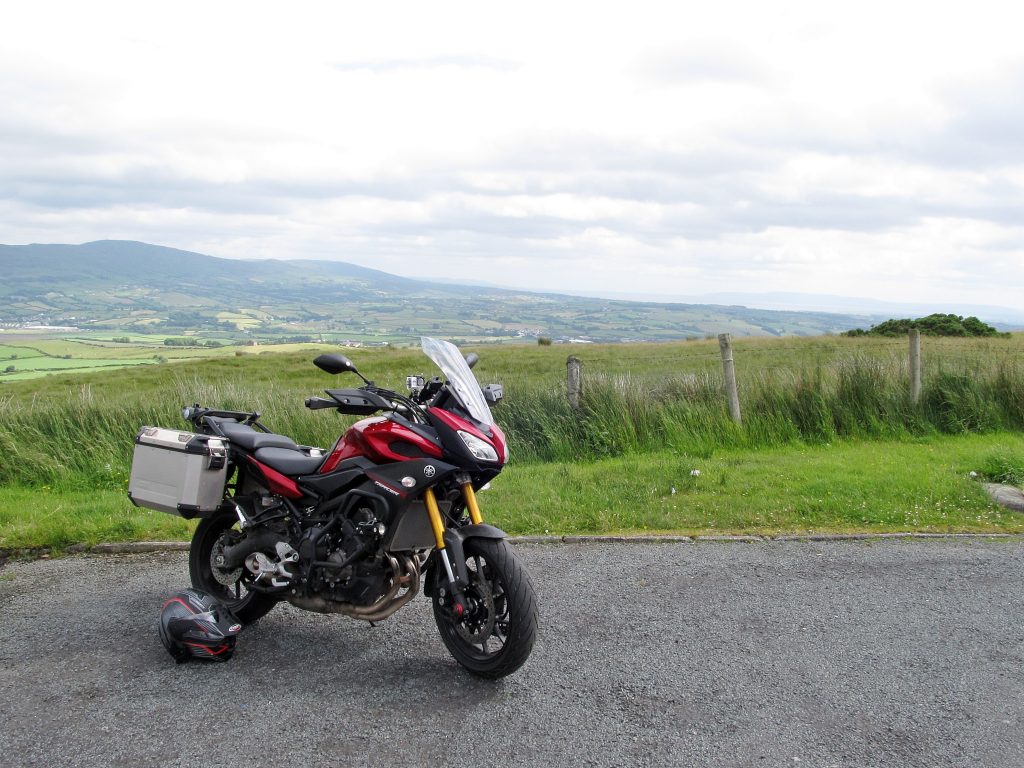 THE PLAN
I like to keep my plans simple, so the idea was to camp at the UK HUBB, then leave there on the Sunday and ride across the back roads of Wales to my brothers’ place in North Wales, stay the night, and leave the next morning for a ferry from Anglesey to Dublin. From there I would head north into Ulster, follow the Antrim coast into Donegal and the wonderful Wild Atlantic Way, then to the Irish HUBB at Enniskillen. After a weekend there I would head south to Wicklow to see an aunt and then catch another ferry back to Anglesey.

Putting the plan into practice is so easy thanks to the internet. In no time at all registration for the two HUBB’s was complete and the ferries booked. My actual route was flexible, so I used a hotel booking website (there are several so take your pick) to search for available accommodation in various places along my route. I now had a rough route including daily destinations with postcodes and better yet, grid references to put in the sat nav. Grid references are brilliant as they can literally take you to the door of the address you are searching for.

WHERE TO STAY?
As we know the weather in Ireland can be damp, so the thought of camping in the rain, packing a wet tent, setting up a wet tent and generally being damp on my annual holiday didn’t appeal. I like camping and I camp many times each year, but I like my creature comforts too. Also, a quick look at campsites in Ireland reveals that they are few
and far between, plus geared up for caravaners rather than motorcyclists and can cost 12-20 Euros a night or more. On the other hand, some really good B&Bs can be had from 35 Euros, with Wifi, en-suite, off-road parking and a home cooked breakfast to set you up for the day.

Another good source of budget accommodation are Youth Hostels, where annual membership costs from £15, and much less if you are a real youth and not a recycled one like me. Once a member then a world full of discounted hostels are available in a myriad of locations. Youth Hostels have secret advantages too, like info on local places of interest, routes to take/avoid, many do meals, there are power points to charge your phone, and all come with companionship for the night. 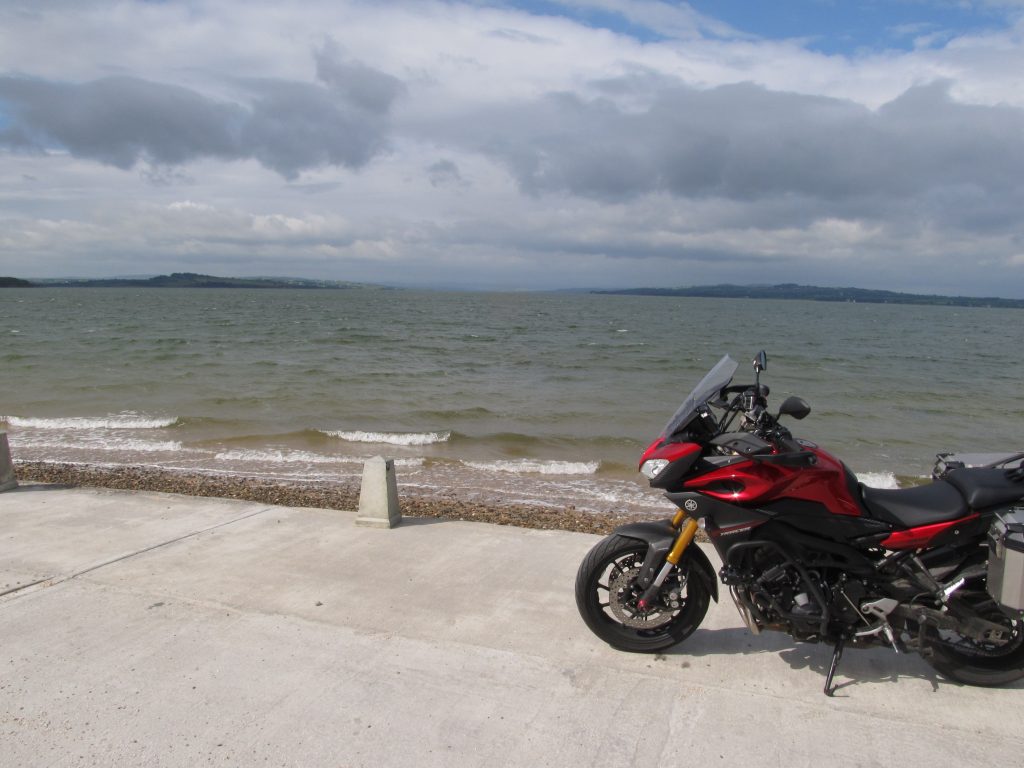 THE FERRY
The ferries across the Irish Sea are frequent, quick, clean and comfortable. Unlike ferries of old, where bikes were roped in against any convenient immovable bit of boat, modern ferries have bike specific areas with deck mounting loops and straps. Putting the bikes together introduces you to your fellow travelling bikers, allowing you to meet like minded travellers and chat the journey away. Watch your exit out of the port at Dublin, as the authorities there would have you go straight to the toll road, where the toll booths are unmanned and only take Euros. Oh what joy I had the other year when caught in their trap without any Euro coins, and how happy were the nice people in the cars stuck behind!

THE ROADS
I don’t like motorways particularly, maybe because the nearest one to me is the M25, so when I can I ride country roads, B roads and at a pinch A roads. I was spoilt in Ireland; they have a nearly new motorway/toll road network if you want to be almost anywhere in the island quickly, yet the older roads are still there, going through rather than around the towns and villages along your route and can be clear of traffic. Thankfully the big supermarkets haven’t got into urban and rural Ireland like they have in Britain, meaning every town and most villages still have their own petrol stations and small supermarkets.

You won’t have any worries about running out of fuel or supplies. Pubs are in every village should you require refreshment, but remember that the Irish authorities have a zero tolerance of drink driving. I found most of the roads to be just fine, well maintained and well sign posted. Speed isn’t required, as the views of rural Ireland demand you slow down and take it all in. Another advantage is that like all civilised nations the Irish drive on the left hand side of the road.

The Wild Atlantic Way is well marked and clings to the sea from Donegal in the north around the western seaboard and ending up in the south. The views are spectacular and varied, with mountains, valleys, moors, The Burran, high cliffs and vast sandy beaches. This is a road not to be ignored. 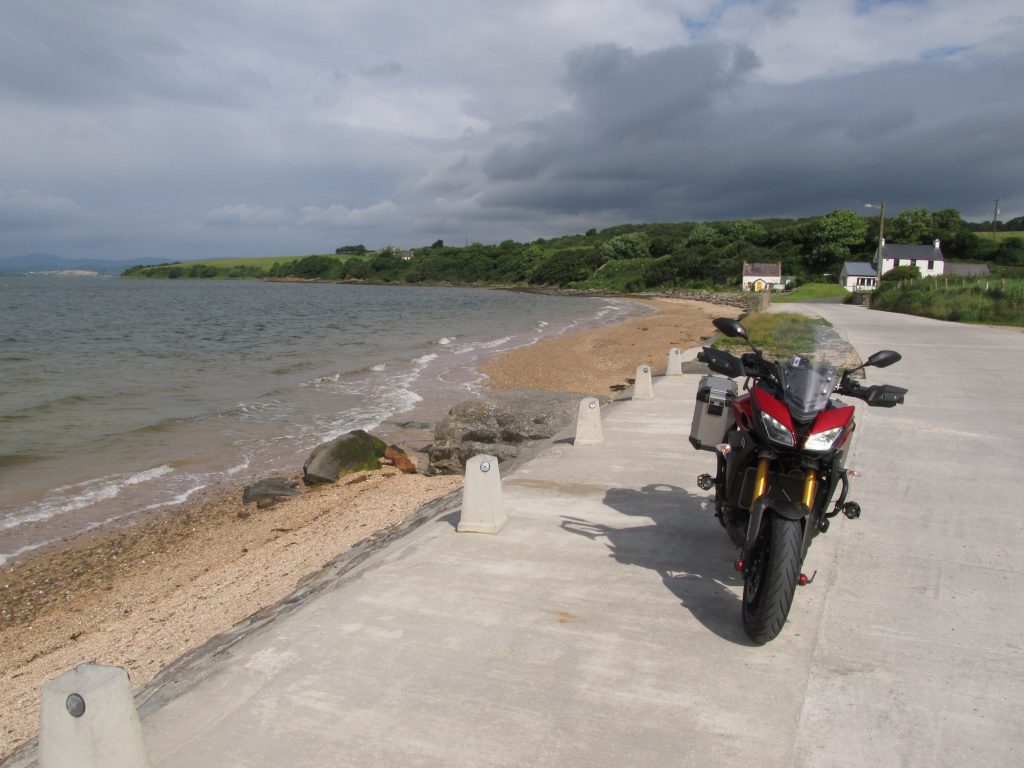 WHAT TO DO?
Ireland has a well established tourist industry catering for all tastes. The choices are varied and of very good quality. Ireland’s history and culture is everywhere and easily accessible. Sports like golf and fishing are very well catered for, cultural centres like theatres, museums, galleries are plentiful. The Irish are friendly, clever, witty and always keen to help.

COSTS?
The costs of travelling around Ireland will depend very much on the Sterling/Euro exchange rate, which itself is dependent on the Brexit negotiations. Overall the costs won’t be much more than an equivalent trip here in Britain, with the exception of the price of the ferry.

THE BIKE
Any bike will do, as long as it is road legal, reliable, comfortable and able to carry you, maybe your passenger and your gear safely. I used my Yamaha MT09 Tracer with Givi panniers and this was probably too much bike for the solo riding I did. With fuel being so readily available and distances relatively short, compared to say Scotland, then the worry of running out of petrol isn’t something that will stress you out. With my gear safely locked inside my panniers security was never a problem, you might want to take further precautions in the bigger cities as you would anywhere else in the UK. Most of all just enjoy it.

For more information on the Wild Atlantic Way click here