Chris Handy takes us on a journey along Route 66, and gives advice on how you could do your own trip. 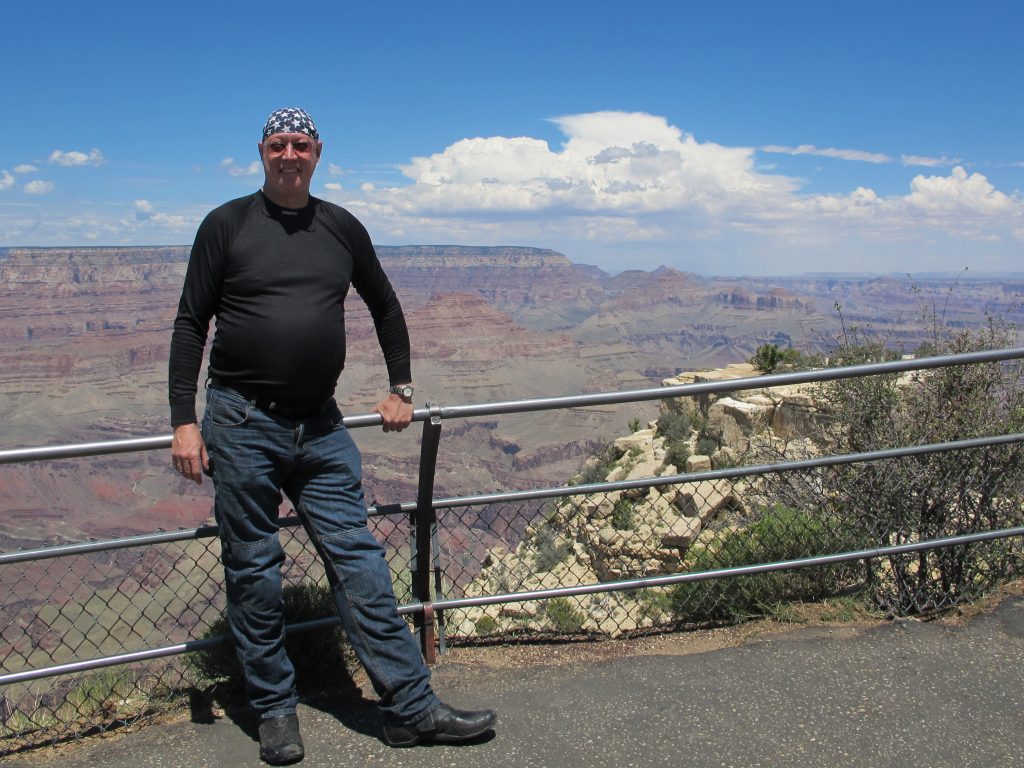 “Do you know what I’d like to do? I’d like to ride down Route 66”. These were the words my wife, Simone, said to me while we were planning how to use money from an inheritance. “Wow!” I thought, “now you’re talking!” What red blooded motorcyclist could pass up an opportunity like that? We started planning for the trip, but our plans never came to fruition as, unfortunately, my wife unexpectedly passed away before we could take the trip. Eighteen painful months later my mind returned to the trip that never was and I decided to make the trip on my own in her memory.

Route 66 is an iconic road, steeped in folklore, myths and mystery. It was the first major highway across America, running approximately 2,500 miles from Chicago to Santa Monica, crossing eight states and three time zones. Its first incarnation was completed in 1927, since then there have been many revisions to the route. Each revision giving rise to a change in a part of the route, often where a town was bypassed. These route variations are called ‘alignments’. Route 66 was officially decommissioned in 1985 so no longer officially exists. Some parts of the old pavement have been ripped up or covered over by interstate; couple that with the many alignments that exist in some sections of the route and it becomes a challenge to follow!

Everyone asks, “What’s best bike to do the trip on?” I rented a Harley Electra Glide with 16,000 miles on the clock from Eagle Rider in Chicago. Other options are to hire a Japanese or European bike (eg FJR1300,GS1200) or to ship your own bike. There are alignments of the old road that have now become ‘off road’ but they are few and far between and its not necessary to ride them to complete the route, so no need for a bike with off road capabilities unless you want seek out some off road. 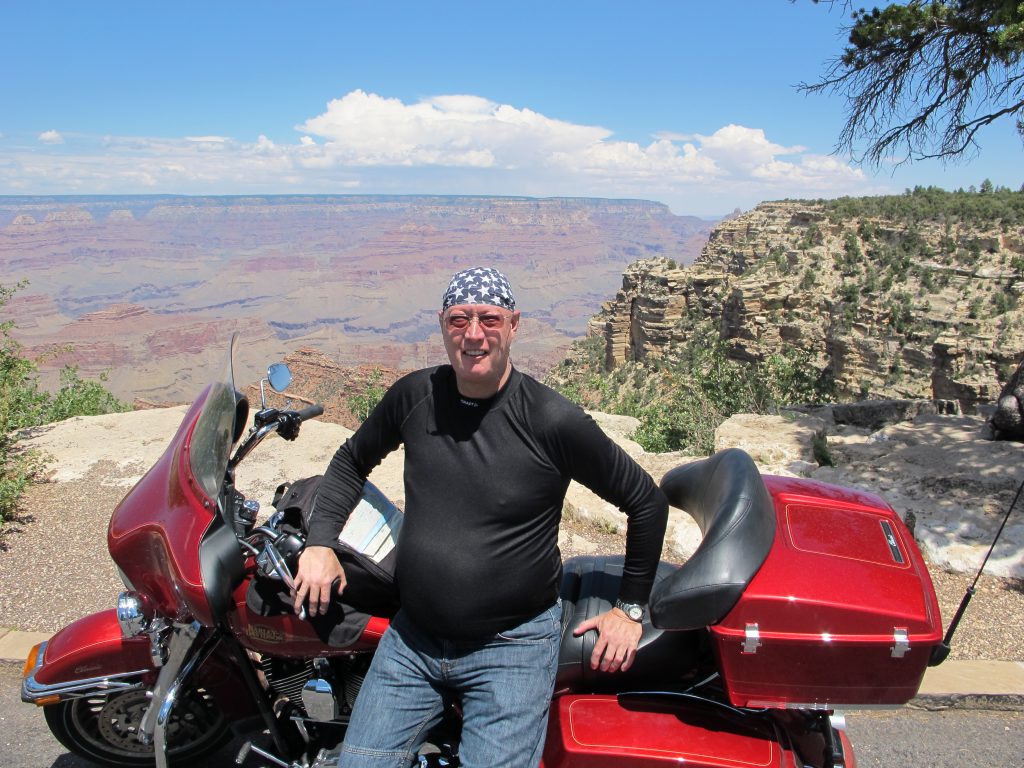 It’s far easier, and cheaper, to hire a Harley than any other kind of bike in America. There is an Eagle Rider BMW in Chicago, but for a Japanese bike you’d have to travel a bit further. I did consider taking my own bike but my calculations showed that shipping and rental costs broke even at around a three week trip (the exact duration of my trip), plus you have to factor in loosing your bike for a week or so either side of the trip whilst it is shipped. On the plus side there is no need for a carnet when bringing a bike into America so the paperwork is really easy.

The twenty days I had the Electra Glide cost me around £3,600, which included one way surcharge, Collision Damage Waiver and a sat-nav. Renting couldn’t be easier. You can reserve on-line and all that’s needed on collection is a driving licence (both parts if its a UK licence) and a credit card. Although definitely not a Harley fan I was pleased with my bike choice. Most of the roads are straight so cornering ability isn’t high on the list of priorities and since I wanted to see the country rather than rush through it, performance wasn’t crucial either.

It’s wise to think about what time of year to make the trip. Too early or late and Chicago will be snow bound. In the height of summer the Mojave desert will be far too hot for comfort. Therefore the best times are likely to be around April/May or September/October. I made my trip in August and was too hot all of the time (122F / 50C at the hottest!). In Missouri I stopped and bought a mesh jacket and posted my ventilated leather jacket back home. Apart from that I wore boots and kevlar reinforced jeans. I always rode with summer gloves but gave up wearing my full face helmet in states where I didn’t need to after I got so hot wearing it I started to feel faint and dizzy. I didn’t really experience any rain but it can, and does, rain there, so take waterproofs!

My approach to trips is to research my destination so I know what to look out for when I’m there, but not to ‘over plan’ the trip. I calculate the duration by estimating how many miles I can cover in a day divided into the expected total distance. I don’t make firm plans about where to stop and, with a few exceptions, don’t book accommodation in advance. Accommodation in America is abundant and relatively cheap, and this holds true for the Mother Road. I stayed in motels with a few hotels thrown in where necessary. When I’d had enough of riding for the day I just kept my eyes open for a likely looking resting place and, if the price was right, checked in. 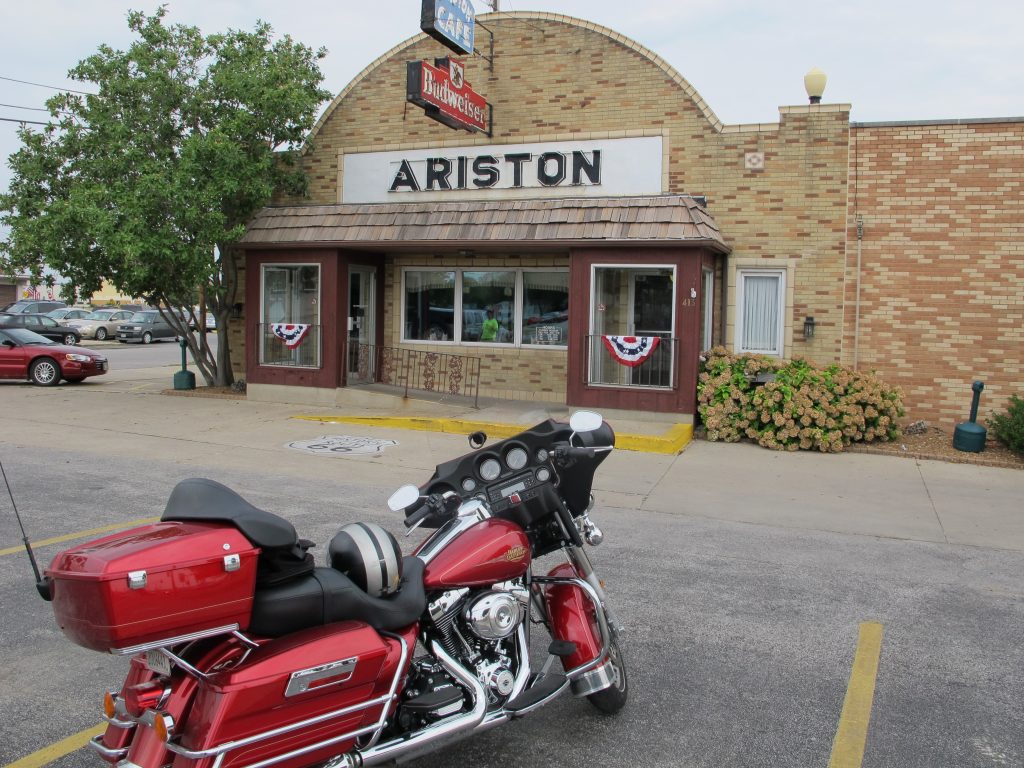 I made my 3362 mile trip in eighteen days. I rode every day apart from one day’s rest at Avila Beach on the Pacific Coast Highway. This gave me an average daily mileage of 188 miles for the seventeen days I was riding. Given the choice I’d have taken longer and ridden fewer miles each day to allow more time for stops and sightseeing. A month would be ideal for this trip, but there’s enough to see and do to fill an even longer trip if you have the time. If I repeated the trip I’d take more time in Illinois and Missouri. These are the first states that the Route passes through and towns and ‘attractions’ are far closer together and more frequent than further west in Arizona and California so more stopping time is needed in these early states.

I started the trip with some fear and trepidation because of the emotional circumstances surrounding the it. I shouldn’t have worried because I had an absolute blast and loved every minute of it. Several times I did find it emotional, especially the night I sat in my hotel room overlooking the beach in Ventura California on the day I completed the route thinking about my wife and crying like a baby because she was only with me in spirit. Apart from that it was fantastic. I had considered making the trip as part of an organised tour group, but am so glad I did it on my own. Not only did it make it more personal to me and to the memory of my wife Simone, but I found that people were more ready to talk to a lone biker, so it was easier to get to know ‘ the locals’ and I could travel at my own pace.

I met some great people, not ‘great’ in the sense of ‘save the world’, but great in the sense of being gratifyingly human, people prepared to befriend, and help, a fellow human being. People interested, and intrigued enough with my accent to take the time, and trouble, to ask about, and engage with, my story. People of dignity, happy to share their lives with a person from another culture. Most of all it gave me a lot more confidence to face the future on my own. I‘m glad I went and would totally recommend it to anyone.