Motorcycle travel isn’t all plain sailing. Sometimes it takes a leap of faith to even make it to the road in the first place. Here, Ross MacDonald and his partner Heather travel to Ibiza for a budget scooter adventure, beating demons along the way… 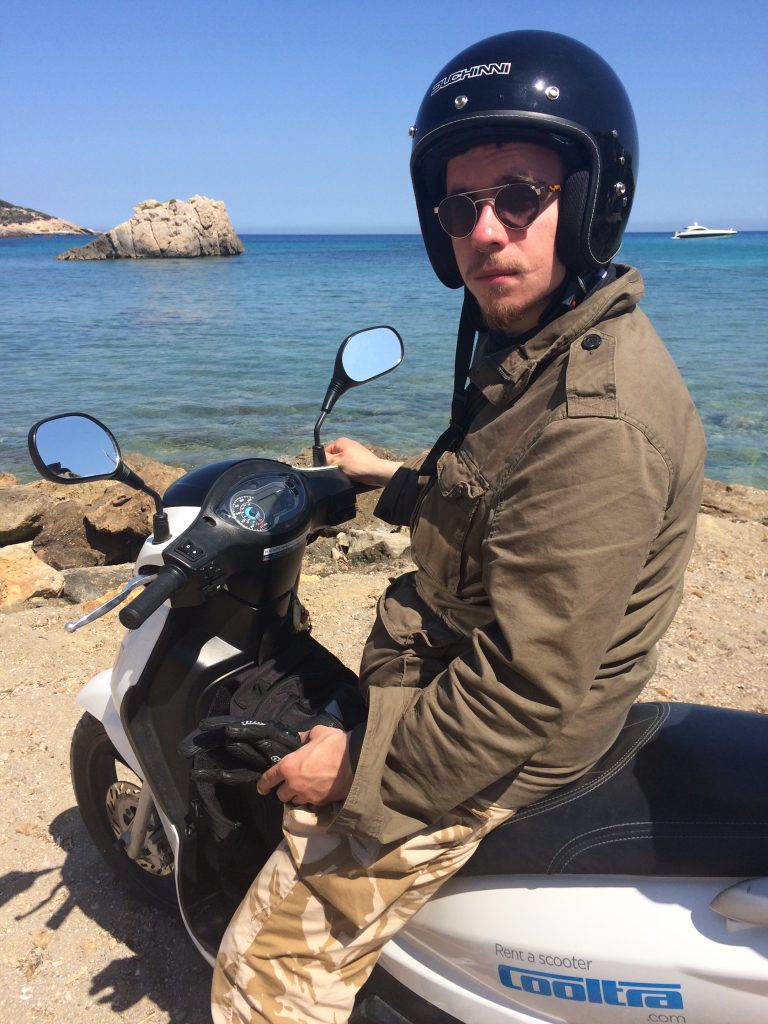 The typically dour Scottish weather perfectly matched the growing feeling of dread that was currently brewing in my gut. I was just about to board a flight to Ibiza, an island that was, in my mind, a honey-pot for drunken Brits and obnoxious partying which wasn’t helping my already low enthusiasm for the trip.

Heather, my much more adventurous girlfriend, had managed to grab flights for a ridiculous £10 return each, with our plan to hire a scooter for the four days that we would be there, taking each day as it came. With prices this cheap and a sunny, warm climate ahead, my reluctance to board the flight seemed rather unfounded and a tad ungrateful.

However, for many years I was (and still am) suffering from severe depression, for which I was hospitalised just a year prior, so what would have been an amazing getaway for most folk was a huge and nerve-racking task for me. Plus, we were also very skint, unemployed drop-outs, so that didn’t help my worrying. To top things off, I had also just passed my bike test and had never ridden in a foreign country before.

After much encouragement from Heather and a good deal of determination I was sat on the flight, which passed in a blur. The greys and green of Britain gave away to a clouded seascape before the arid Spanish mountains eventually began to sprout into view. 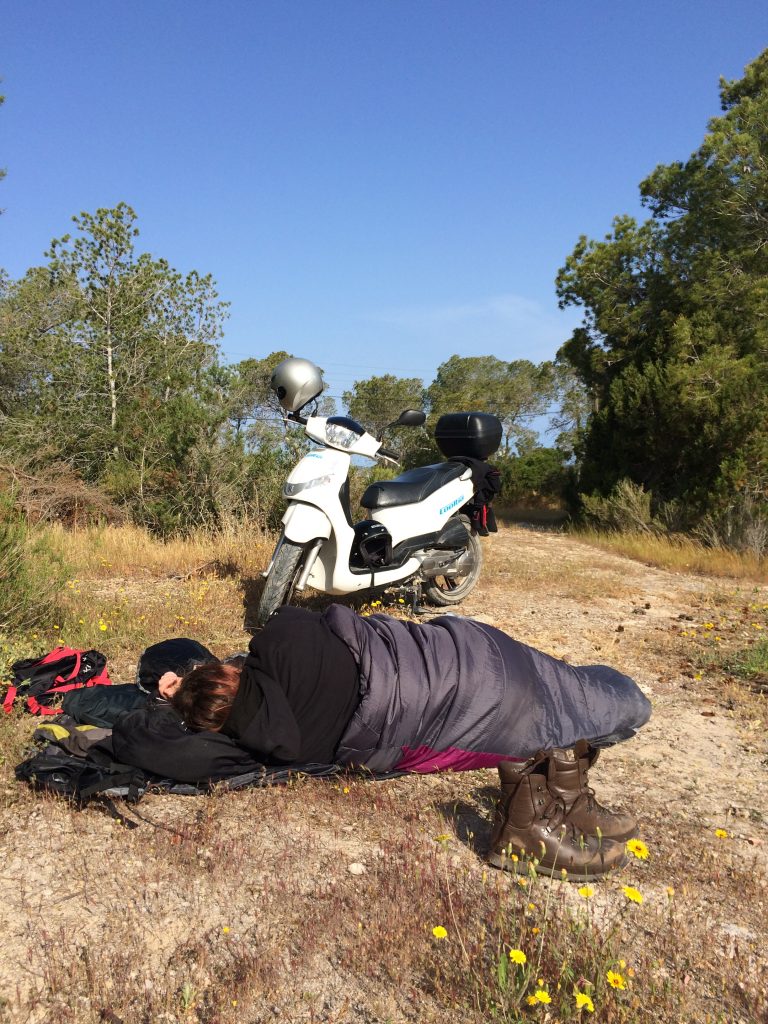 After landing we were met with a wave of Mediterranean heat, despite it now being the evening. My anxiety was still firmly rooted but at this point I was forced to go on and so we ventured into the pleasant warmth.

Heather had been in touch with a local, a man named Paco, who had offered to let us stay with him so we could collect the scooter in the morning. I had never couch-surfed before and I was a tad nervous about the idea, but a few hours later that worry was gone. I was amazed at the bizarre kindness and amazing hospitality of strangers. Paco fed and watered us and very kindly dropped us off at the airport in the morning to pick up our scooter.

And what an awful scooter it was. Our ride was a tired and truly forgettable 125cc Peugeot that had all the power and elegance of a turnip, but it was the cheapest option. It was at this point that I started to feel excited, staring at this heap on wheels as the maddened Spanish traffic screamed past us. We climbed on and went to find some food.

My first time riding in a foreign country was later in the day when I took the Peugeot down a mountain bike trail. It was also my first time ‘off-roading’. To be fair to it, the poor scooter took all the abuse we threw at it and it left us with huge grins in return. It made me realise that it didn’t matter what you were riding to get that sense of adventure. I relished that feeling of going off the beaten track and not knowing or caring which route to take. 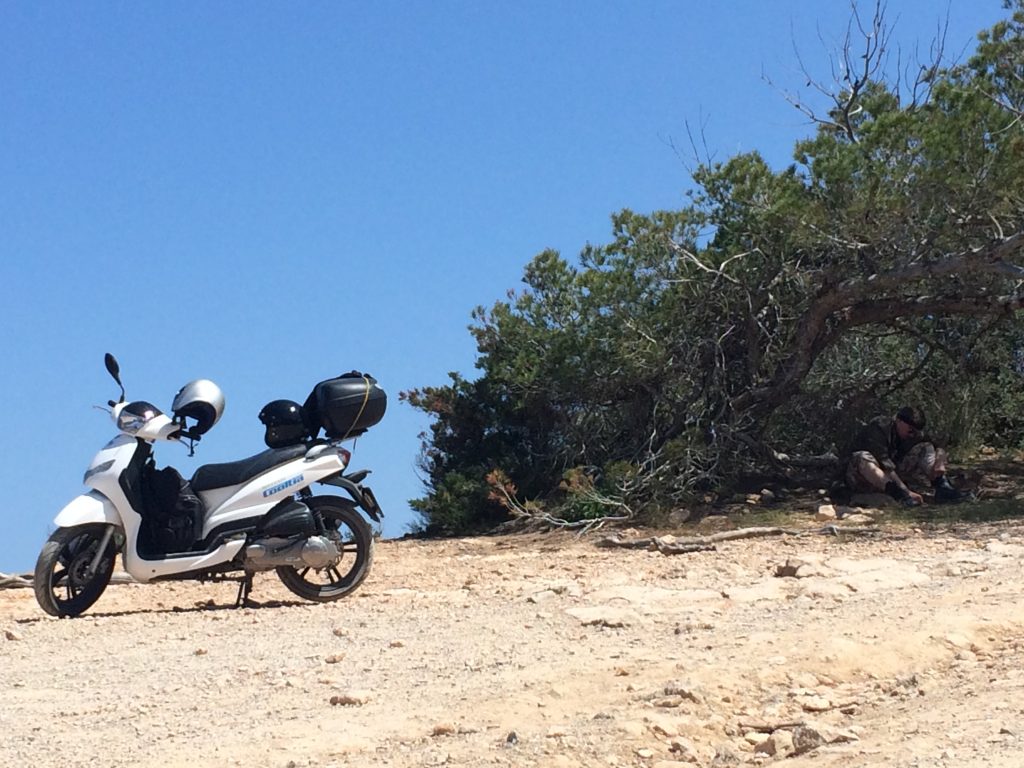 I was also finding out that there is much more to Ibiza than clubbing. The island is a beautiful vibrant place with excellent twisties to throw the bike around and marvellous scenery to compliment them. The traffic was soberingly dangerous too, with no one seeming to care about any road markings making for interesting riding.

As night dawned we roamed about until we found a place flat enough and quiet enough to set up ‘camp’, which purely consisted of two sleeping bags and an Aldi bike cover to lie on. We cooked cheap pasta bought earlier that day over a small camping stove, using a teaspoon nicked from a coffee shop as cutlery. Sat staring at the small fire in the darkness, I realised I hadn’t felt down or anxious for a while. I had been living in the moment, taking each bend and hill as it came. I was feeling quite peaceful.

The sense of serenity was abruptly ended as morning erupted, waking to a score of bite marks and scratches, having just spent the night out in the open. Nevertheless, we began another day riding around the small island, buying cheap food, sneaking into cafés to charge our phones and getting chased out of said cafés. It was later that I experienced my first depressive episode of the trip. Despite everything that I had been enjoying, I was overcome with the familiar gnawing nothingness that floors everything in its path. Heathers response to this was to drive me to a very steep cliff edge (which looking back was a bit worrying) and make me stare at the glistening sea. After a while of sitting on that sun-baked hill, I forced myself back on the bike and we went on our way.

I realised that I would have had that exact same feeling back in Scotland or anywhere for that matter. I realised that depression does not care about what I do so there is no reason for me to hold back when fighting it. No reason that I shouldn’t go on spontaneous trips, experience the world and meet new people. The struggle to do so came more from within myself rather than my wallet, since we managed to spend a pretty small amount of money during the whole trip (it worked out at around £65 each).

After we had managed to explore pretty much the entire island, we headed home. The trip had awoken something, it had sparked an overwhelming urge to keep exploring more places on two wheels, to go into the wild. Most importantly, I had proven to myself that I am capable of stepping into the unknown and experiencing the world. I’d just like an actual bike to do it on next time.” 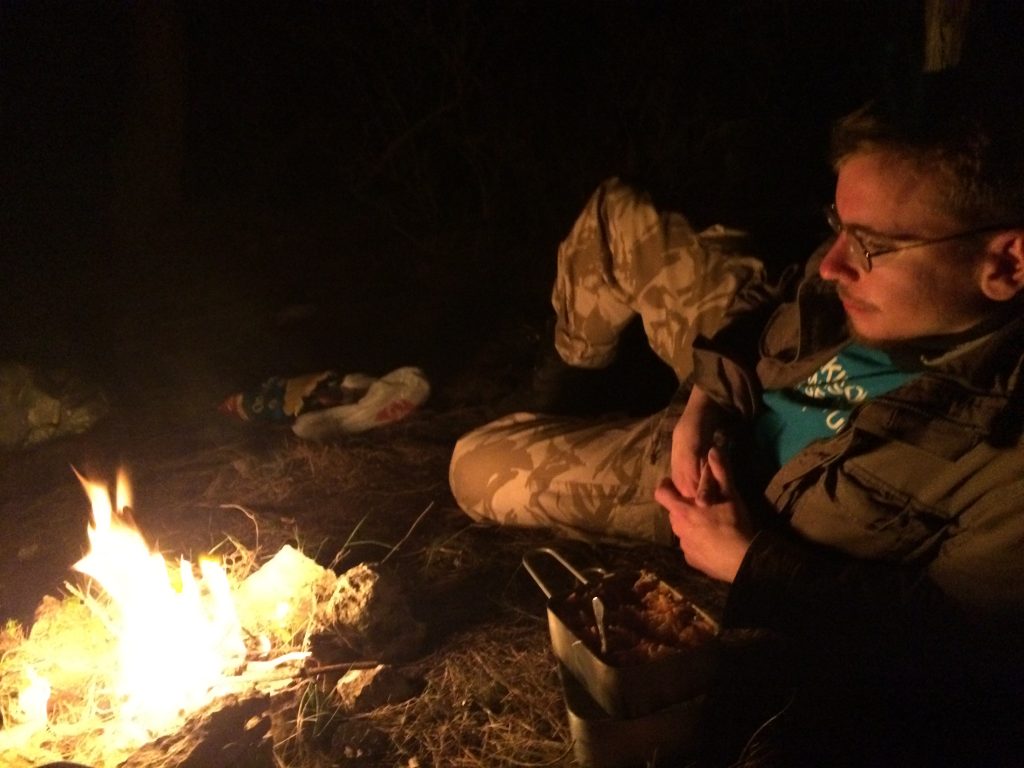 To tell your own story of adventure, message me at nathanmillward121@hotmail.com