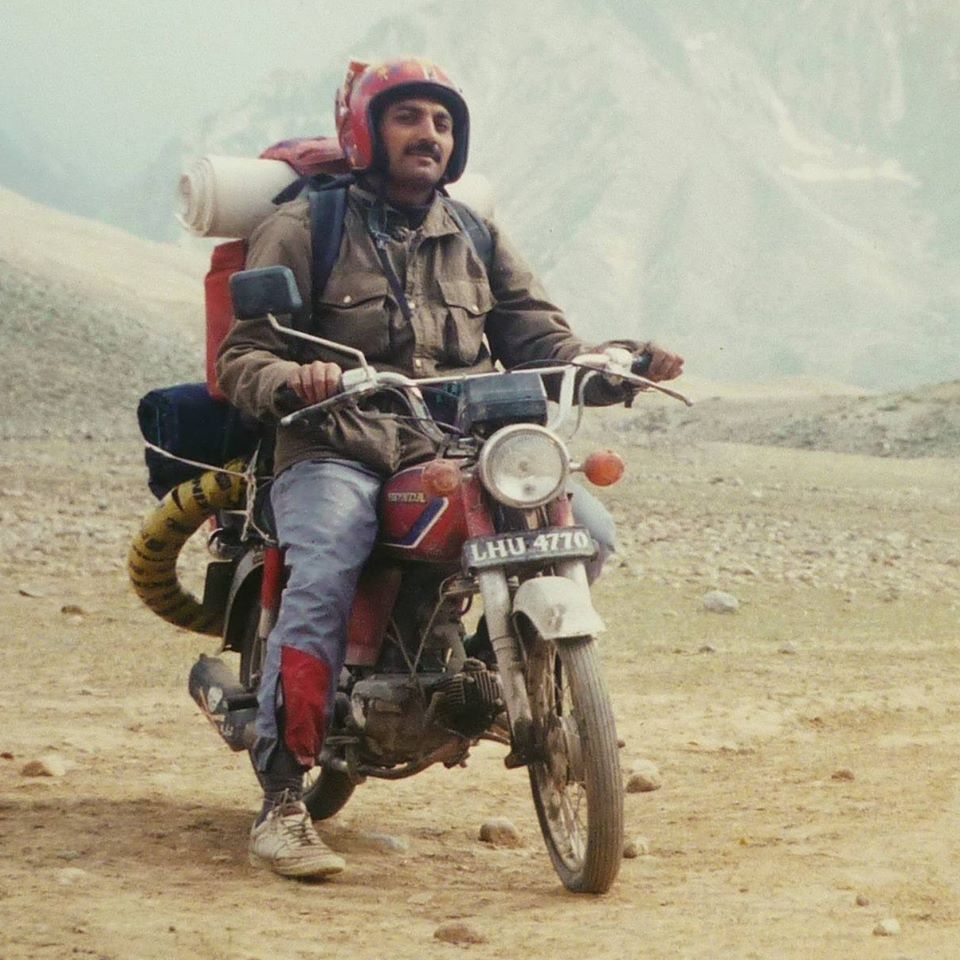 It’s common to start riding so young here in Pakistan, certainly for the boys, less so for the girls. It mostly happens when parents allow it or don’t know about it. I’m sure most kids all around the world want to do it as early as possible. It’s in the nature of boys to ride.

Over the years I have done most of my riding on either a pushbike or a Vespa Scooter. Then later on a Honda CD-70 and then came a Honda CG-125. Currently I ride a Suzuki GS-150. We don’t have many big bikes here in Pakistan. The first limitation is the initial cost of owning one. Not a lot of people in Pakistan can buy an expensive large capacity motorcycle and those who do own one have the fear of dropping it because of the unavailability of spare parts.

I started off by exploring the suburbs of my home-town of Lahore in a radius of around 100km. After that, in 1983, I began exploring Pakistan’s northern mountainous regions.

It was my fascination of diverse cultures that made me go. Nature gave me the reason for exploration, the motorcycle gave me the means to travel to places where usual modes of transportation could not take me. And I enjoyed meeting new people in different areas. 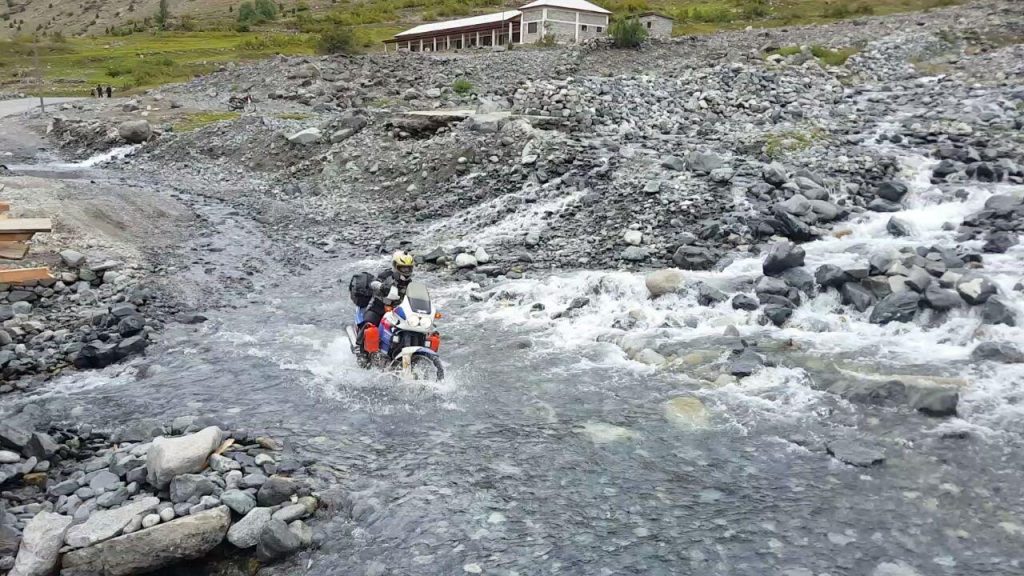 What I enjoy most about my travels is the freedom. I take the usual basics: bike repair tools, puncture repair kit, a tent, cooking utensils, gas cylinders etc. Nothing fancy. I wear normal warm clothing. No high-end protective apparel.

I cannot overstate the support I got from my father and mother when I started riding motorcycles. My wife, children and relatives have equally been supportive. The first question my father, being the fatherly figure he was, asked was about the photographs whenever I returned from an expedition. He just wanted to see what I had seen. 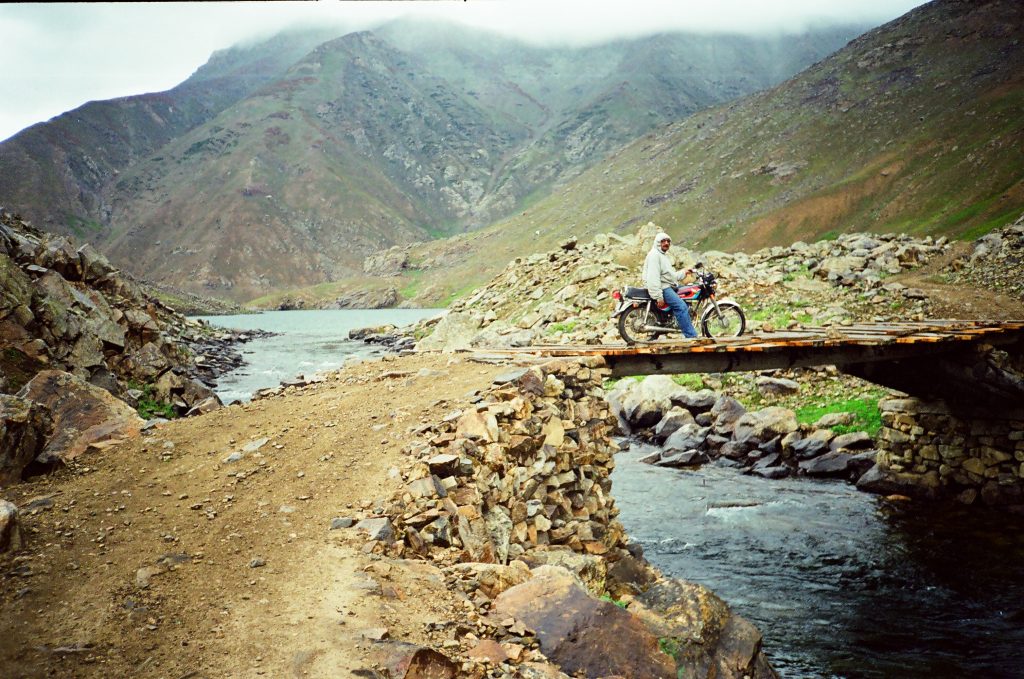 My most challenging expedition was on a stretch from Jalkhad to Chilas, which today takes around 3-4 hours on newly laid tarmac road. Back in 2009 it was still dirt and mud and took us 17 hours to ride. We had to cross 5 glaciers and on two occasions construct a road using rocks. Not foreseeing the condition of the road, we were not carrying anything to drink or eat. We crossed the 4000+ meter high Babusar Pass at around 9pm in biting wind and then reached Chilas at 1.00am. This is one adventure of many I have experienced, but have dozens of unforgettable motorcycling experiences.

There aren’t too many difficulties in exploring Pakistan by motorcycle, except for a few specific areas in the extreme North-West region adjacent to Afghanistan. If you stay away from the identified areas, there is no more danger here than anywhere else.

I have met many foreign motorcyclists in the last 25 years of riding. They are usually on a world tour and do not want to miss the amazing Karakoram Highway, Deosai, Khunjerab or Shandur Pass, and also Junction Point where the 3 highest mountain ranges – Karakorum, Himalayas, Hindukash – all converge at one point. I haven’t met anyone yet who was not all praise about this country, its people, hospitality and raw beauty of the majestic North.

If I could ride anywhere in the world it would be the South America and Pan-American Highway. The appeal is the length and breadth of that ride, with the diversity of terrain giving me the opportunity of exploring new cultures, meeting new people and riding long distances. One day.

Meanwhile, for anyone wanting to ride a motorcycle in Pakistan my advice would be to come and explore. You’d be surprised at what you might find here. Just one piece of advice: have consideration for local customs and you’ll be just fine. 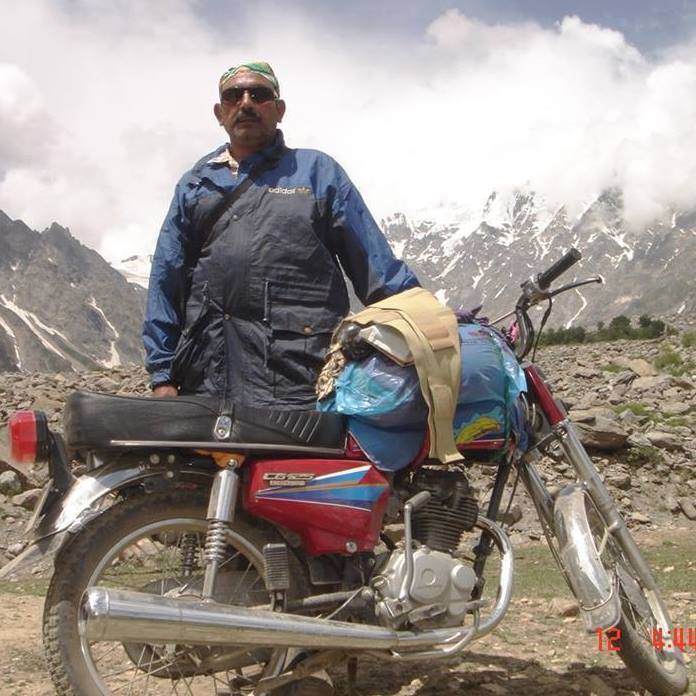 HOW TO RIDE PAKISTAN
Gohar’s story is here to remind us that people ride bikes and push their boundaries all around the world, even a place many of us know little about such as Pakistan. Those having ridden through it can vouch it for being an incredible landscape of deserts, mountains, amazing kebabs and kind and welcoming people. Unlike India there isn’t a booming rental and guided tour industry, but northern Pakistan previously enjoyed a flourishing tourism industry so the infrastructure is there. Try Lahore and Islamabad for bike hire, or here: www.ridethekkh.com for guided tours. 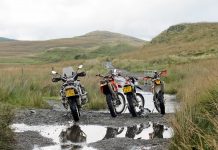 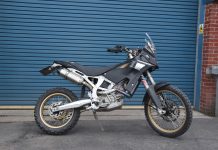